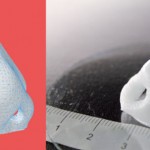 Doctors have been employing 3D-printed tissue for years now. But even though the hype around 3D bioprinting has raised expectations that it will save lives and shorten donor wait lists, fully functional printed organs are not feasible yet. While we won’t be seeing blood pumping printed hearts any time soon, getting a new nose could become easier. Professor Marcy Zenobi-Wong’s team of researchers, led by Matti Kesti, at ETH Zurich’s Cartilage Engineering and Regeneration laboratory, has found a way to bioprint a joint or nose cartilage that is designed to grow with the body over time. Current cartilage transplant procedures rely on two-dimensional cell generation that doesn’t evolve as the patient’s joint regains function in the future. 3D bioprinted cartilages, on the other hand, are expected to reproduce and become a part of the body’s mechanism. In the case of reconstructive surgery on a smashed nose, a digital 3D model is created while a biopsy removes cartilage cells from the patient’s body — knee, ear or even pieces of the busted nose. The cells are then spawned with suitable biopolymers, either extracted from seaweed or generated by the human body, to create a hydrogel consistent with the suspension of the printer. The biopolymers act as a shaping mold for the cells until the cartilage cells in the body break them down. Over time, according to the research team, it would become virtually impossible to differentiate between the transplant and the original cartilage in the body. “We hope that in the future our technology could be used to overcome the need for cartilage donor tissue, ” Kesti told us. “The bioprinted cartilage piece could be printed based on the patient defect and need so that the personalized shape and size is regained.” Even though this technology has the potential to personalize medicine and create body-replicating magic, bioprinting and research is an expensive and exhaustive process that prevents cellular 3D printer cartridges from being widely available in hospitals just yet. “The potential of 3D bioprinting in future is that it is the ultimate technology to regenerate patient specific shape of tissue or even organs, ” says Kesti. “There is no better way to make the shape than 3D printing so it is worth investigating the technology.” His lab, equipped with a majestic bioprinter that can create a cartilage in roughly 16 minutes, is now ready for pre-clinical trials. If the cellular concoction becomes a viable option for human trials, it could make bioprinted cartilage implants far more successful than their silicone counterparts. [Image credit: Cartilage Engineering & Regeneration Group , ETH Zurich] Comments Source: ETH Zurich

New Firefox version says “might as well” to encrypting all Web...