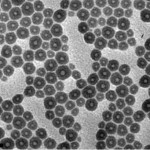 Have you ever been playing around with molten metal salt, when you accidentally created hollow, soft-shelled particles that could one day increase hard disk storage or power future QLED displays ? Us neither, but that’s exactly what happened to scientists at Rice University when they were researching “tetrapods” to make solar panels more efficient. Through an apparently wacky coincidence, they removed a single ingredient from the tetrapod stew, which left behind tiny droplets of cadmium nitrate. Selenium then melted around those drops, which completely dissolved away, leaving a melted selenium ball with a hole in the middle. It turns out that those selenium “doughnuts” can be packed tightly onto a metal surface without touching, thanks to their soft shells, which could allow more bits to be packed onto a hard drive, or be used in quantum computers and next-gen displays. Since the dots are smaller than a living cell, it took the researchers an entire year to figure out what they’d made and how they did it — luckily they didn’t just bin the whole thing and start over. Filed under: Displays , Storage , Science , Alt Comments Via: Extreme Tech Source: IOP Science