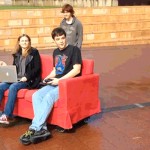 There’s a different kind of two-seater roaming the sidewalks of the University of New South Wales (UNSW) in Australia: a motorized couch. Thanks to the efforts of a few engineering students, what started as a joke amongst friends is now a Xbox gamepad-controlled robotic sofa. Under the cushions, there’s an electric scooter motor and an armrest-mounted Raspberry Pi to wrangle the vehicle’s four independent wheels. All told, it took a group of nine students a year to get the kinks worked out of the mechanical, software and assembly systems. “We were thinking about making a fridge robotic, too, so you could call it over, ” said co-creator Will Andrew. One thing’s for sure: they’d certainly improve gameday lounging . Filed under: Misc , Transportation Comments Source: UNSW Australia

Excerpt from:
Robocouch takes students to class without all of that exercise nonsense