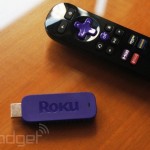 When Roku released its first Streaming Stick in late 2012, it was a tough sell. It cost $99 (as much as the highest-end Roku box), only worked with TVs that were certified as ” Roku Ready , ” and it didn’t even ship with a remote. So the god-father of set-top streaming boxes went back to the drawing board for the 2014 version of the Roku Streaming Stick, which abandons its reliance on MHL (Mobile High-Definition Link) for standard issue HDMI. It also comes prepackaged with a remote, though it lacks the motion control and headphone jack you get on more expensive models. For the internals, the company essentially crammed the Roku 1 into a dongle format — and that includes its wallet-friendly $50 price point. While it’s not quite as cheap as the Google’s streaming stick, it does play host to a plenty more content sources. Whether or not PBS , Showtime and over 1, 000 niche channels of video programming is worth the extra $15 is depends on you. Other than form factor, the only difference between the Roku 1 and the Stick is that the latter ships with the latest versions of Roku’s apps, though, those will be coming to the full sized box in the near future. That means you’ll be able to cast photos and videos directly from your phone. Alongside the 2014 edition of the Streaming Stick, the company is launching a revamped mobile app. The most immediately obvious different is the UI, which puts stark purple line drawings on black background. More importantly though, it puts the platform’s universal search at your fingertips. So, rather than having to look at your TV to browse through the results, you can pick out the best place to watch Sherlock for free with just the tap of your touchscreen. The new Roku Streaming Stick will be available in April either direct from the company’s site or through the usual retailers (like Best Buy) for $50. Filed under: Home Entertainment , HD Comments