Not to be outdone by Nvidia’s Tegra 4 announcement and Qualcomm’s Snapdragon 800-series announcement, Samsung took to the stage today to announce the next processor in its Exynos 5 lineup: the Exynos 5 Octa is an eight-core SoC destined for tablets and high-end smartphones. Not all of these CPU cores are created equal: four of them are high-performance Cortex-A15 cores, the very same found in the Exynos 5 Dual that powers the Nexus 10 and Samsung’s ARM Chromebook . The other four are Cortex-A7 CPU cores—these have the same feature set and capabilities as the A15 cores, but are optimized for power efficiency rather than performance. This makes the Exynos 5 Octa one of the first (if not  the first) products to actually use ARM’s big.LITTLE processor switching technology, something we outlined back in October of 2011 . The SoC is designed to dynamically split the workload between the high-performance and the high-efficiency CPU cores based on the task at hand—less strenuous activities like browsing an app store or checking e-mail might be done on the A7 cores, for instance, while gaming and number crunching could be handed off to the A15 cores. Read 3 remaining paragraphs | Comments 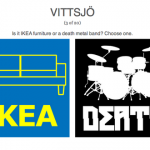 Can You Tell These Ikea Products and Death Metal Bands Apart?