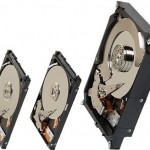 Seagate has had some skin in the hybrid hard drive game for some time, but always in 2.5-inch wide versions — great for your laptop, not so much the cavernous spaces of a gaming tower. Its just-shipping Desktop SSHD fills that gap in a nearly literal sense. Along with slotting neatly into a 3.5-inch bay, the larger SSHD carries both 2TB of spinning storage and 8GB of flash to speed up disk-intensive tasks without throwing away capacity (or money) on a pure solid-state drive. It should be as much as four times faster than conventional desktop drives, Seagate claims. Whether or not that’s true, the firm isn’t neglecting its portable-owning friends: it’s shipping a new 1TB, regular-height Laptop SSHD and a 500GB, 7mm (0.28-inch) Laptop Thin SSHD, either of which is up to 40 percent faster than its predecessor. Seagate hasn’t mentioned pricing for any of the drives at this stage, although it’s safe to presume they’ll undercut SSDs with equivalent space. Filed under: Desktops , Laptops , Storage Comments Source: Seagate

The ‘Impossible’ EM Drive Being Tested By NASA May Finally Be...