New submitter electron sponge writes “On Friday morning, the Senate renewed the FISA Amendments Act (PDF), which allows for warrantless electronic eavesdropping, for an additional five years. The act, which was originally passed by Congress in 2008, allows law enforcement agencies to access private communications as long as one participant in the communications could reasonably be believed to be outside the United States. This law has been the subject of a federal lawsuit, and was argued before the Supreme Court recently. ‘The legislation does not require the government to identify the target or facility to be monitored. It can begin surveillance a week before making the request, and the surveillance can continue during the appeals process if, in a rare case, the secret FISA court rejects the surveillance application. The court’s rulings are not public.'” The EFF points out that the Senate was finally forced to debate the bill, but the proposed amendments that would have improved it were rejected. Read more of this story at Slashdot. 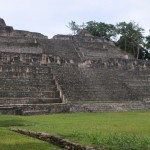 What destroyed the Maya? We have a new clue, in the...