The Los Alamos National Lab wrote in 2012 that “For over 20 years the military, the commercial aerospace industry, and the computer industry have known that high-energy neutrons streaming through our atmosphere can cause computer errors.” Now an anonymous reader quotes Computerworld: When your computer crashes or phone freezes, don’t be so quick to blame the manufacturer. Cosmic rays — or rather the electrically charged particles they generate — may be your real foe. While harmless to living organisms, a small number of these particles have enough energy to interfere with the operation of the microelectronic circuitry in our personal devices… particles alter an individual bit of data stored in a chip’s memory. Consequences can be as trivial as altering a single pixel in a photograph or as serious as bringing down a passenger jet. A “single-event upset” was also blamed for an electronic voting error in Schaerbeekm, Belgium, back in 2003. A bit flip in the electronic voting machine added 4, 096 extra votes to one candidate. The issue was noticed only because the machine gave the candidate more votes than were possible. “This is a really big problem, but it is mostly invisible to the public, ” said Bharat Bhuva. Bhuva is a member of Vanderbilt University’s Radiation Effects Research Group, established in 1987 to study the effects of radiation on electronic systems. Cisco has been researching cosmic radiation since 2001, and in September briefly cited cosmic rays as a possible explanation for partial data losses that customer’s were experiencing with their ASR 9000 routers. Read more of this story at Slashdot. 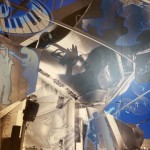