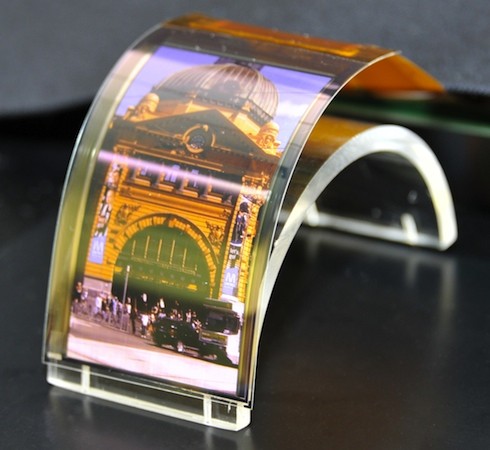 Sharp announced earlier this year that it was starting to crank out LCD panels based on new indium gallium zinc oxide (IGZO) technology and now it’s ready to show some off at the Society for Information Display show in Boston. Currently sized for phones and tablets, the first prototypes include a pair of LCDs, one a 4.9-inch 720×1280 display, and the other coming at 6.1-inches with a resolution of 2560×1600. As an example of what will be possible further down the line, it also has a pair of OLED panels, one 13.5-inch 3840×2160 QFHD panel based on White OLEDs with RGB color filters (similar to the LG HDTV recently introduced), and a flexible 3.4-inch 540×960 screen (shown above). According to Sharp the new tech means screens with higher resolutions, lower power consumption, narrower bezels and higher performance touch screens because it enables even smaller thin-film transistors than the ones currently in use. The Associated Press reports it expects to apply the upgrade to production lines in this fiscal year, for now you can hit the source link for a few diagrams and examples of crystalline structures or check the gallery for pics of the other displays.