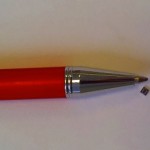 Battery life on your mobile can be a constant source of anxiety if, like us, you’re pretty much “always on.” Scottish-based firm Sofant thinks it might have the answer, or at the very least, a soothing tonic with its SmartAntenna technology. It’s claimed that the tiny antenna you see above consume 90 percent less energy, and can potentially double battery life of devices. It’s not just the dwindling power that gets a boost, with Sofant claiming it can also ease network congestion and dropped connections by reducing the number of devices with weak signals. SmartAntenna complements the firm’s existing technologies, but can also be used individually. It’s something that manufacturers will be able to license, so it’s hard to predict what uptake will be like. But if the claims above hold true, it seems too good to pass up. Continue reading Sofant SmartAntenna could double battery life, ease network congestion Filed under: Cellphones , Mobile Comments