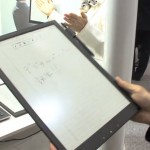 Earlier this week, we learned of Sony’s plans for a 13.3-inch e-ink slate with stylus support pitched at students, and now Diginfo has caught up with the prototype device at the Educational IT Solutions Expo in Japan. The A4-sized tablet is said to be the first piece of hardware with an E Ink Mobius display that’s flexible and light due to its new plastic construction. Co-developed by Sony and E Ink, the display only contributes 60g to the overall weight, which is apparently 50 percent lighter than similar screens built with glass. Sony says the software isn’t quite as slick as it’d like it to be just yet, but nevertheless, you can check out people scrawling, annotating and highlighting on the prototype in the video below. Filed under: Sony Comments Source: DigInfo (YouTube)