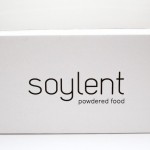 A single week of Soylent contains seven meal pouches and seven oil containers. Total weight is just about 10 lbs (4.5 kg). Lee Hutchinson Soylent, the slushy slightly sweet meal supplement/replacement from California engineer Rob Rhinehart and his company Rosa Labs, has by most accounts been a smashing success story. We tried it and liked it a year ago. While we wrote more about why folks might (or might not) want to drink it once it hit its official release , the Rosa Labs development team has continued work even as shipments of the powder leave the factory by the truckload. In an update e-mail yesterday morning, Rosa Labs announced two major milestones: first, that shipments have (finally) been completed to everyone who backed the Soylent crowdfunding project prior to its closure, and secondly, that Soylent is getting its first major update to version 1.1. It seems a little weird that food (or “food”) has a version number, but Rhinehart always intended Soylent to be a product that changed over time based on feedback and market forces. In a quick post on the official Soylent blog, Rhinehart explains that the bump to 1.1 brings with it a decrease in the product’s sucralose level, dialing down the release version’s vague sweetness to a more truly neutral taste. The logic here, explains the post, is that it’s easier to add sweetness than to take it away, and many Soylent 1.0 users have expressed a desire to flavor the product with add-ons (peanut butter is a popular one, as is blended fruit). The second change deals with my biggest issue with Soylent—what can be politely termed as “a bit of gas.” Regular Soylent use eliminates the gas, but using Soylent as an occasional substitute for a missed meal—which is my preferred usage of the stuff—can introduce some thunderous gut activity (which I referred to in my original Soylent review as ” horse-killing farts “). Read 5 remaining paragraphs | Comments

A New Kind of Masking Tape Will Save the Aerospace Industry...