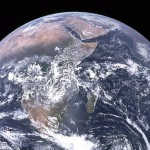 The iconic “blue marble” picture of Earth, taken during the Apollo missions, will be a regular feature of the DSCOVR hardware NASA SpaceX announced that it had won two big US Air Force launch contracts Wednesday. If successful, the two demonstrations would help them qualify to compete for Air Force business against launch provider ULA (United Launch Alliance), which currently has a stranglehold on the largest Air Force launches. The first launch, planned for a Falcon 9, will send up the long-awaited NASA DSCOVR satellite to a distant point between the Sun and the Earth, where it can look at the Earth with the Sun behind it. The second, a Falcon Heavy launch, will put up several satellites and a 5 metric ton ballast, in an effort to demonstrate the Falcon 9 Heavy for the Air Force. Both contracts fall under the Air Force’s OSP-3 (Orbital/Suborbital) program, an Air Force program specifically designed to bringing in new launch companies. “GoreSat” rises from storage DSCOVR, NASA’s Deep Space Climate Observatory , has been in deep storage since 2001, when it was imprisoned by the incoming Bush Administration. DSCOVR is designed to measure the Earth’s albedo by tracking sunlight reflected back from the Earth from a distant vantage point. Former Vice-President Al Gore suggested that a video camera be installed on the satellite, with the hope that the constant video feed of the distant Earth would provide the same kind of ” Blue Marble ” perspective that the first pictures from Apollo did. The original Blue Marble picture is probably the most-circulated picture in human history, and is widely credited with contributing to the start of the modern ecology movement. Read 9 remaining paragraphs | Comments

Read the original post:
SpaceX gets its first military contract