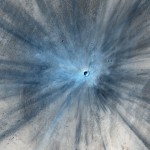 NASA/JPL/University of Arizona Yesterday, the team that runs the HiRISE camera on the Mars Reconnaissance Orbiter released the photo shown above. It’s a new impact crater on Mars, formed sometime early this decade. The crater at the center is about 30 meters in diameter, and the material ejected during its formation extends out as far as 15 kilometers. The impact was originally spotted by the MRO’s Context Camera , a wide-field imaging system that (wait for it) provides the context—an image of the surrounding terrain—for the high-resolution images taken by HiRISE. The time window on the impact, between July 2010 and May 2012, simply represents the time between two different Context Camera photos of the same location. Once the crater was spotted, it took until November of 2013 for another pass of the region, at which point HiRISE was able to image it. Higher-resolution photos, as well as a map of the crater’s location on Mars, are available from the HiRISE website. Read on Ars Technica | Comments

The Matrix Voice is an Alexa for your Raspberry Pi 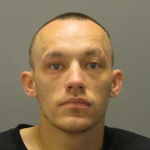