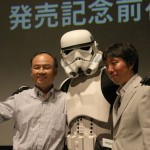 Masayoshi Son (left), poses with a Storm Trooper at Sprint owner SoftBank’s launch of the iPhone 3GS in 2009. Danny Choo Sprint is “working toward a possible bid for rival T-Mobile” but is first examining regulatory concerns that could prevent such a merger, the  Wall Street Journal reported today . A merger would leave the US cellular market with only three major carriers, although a combined Sprint/T-Mobile would perhaps be a more formidable opponent to market leaders AT&T and Verizon Wireless. AT&T attempted to buy T-Mobile, but it  dropped those plans in December 2011 after opposition from the Justice Department and Federal Communications Commission (FCC). Sprint hasn’t made a final decision on a bid, but it could happen in the first half of 2014 and be worth more than $20 billion “depending on the size of any stake in T-Mobile that Sprint tries to buy,” the  Journal reported. “But it would likely face tough opposition from antitrust authorities, who worry consumers could suffer without a fourth national competitor to keep a check on prices,” the report said. AT&T’s takeover bid for T-Mobile would have been $39 billion.The  Journal ‘s   sources indicate that Sprint is wary of wasting time on a deal that might not come to fruition, but the company’s owner is leading the charge. “Driving the current effort is SoftBank Chief Executive Masayoshi Son, an aggressive acquirer who bought control of Sprint earlier this year and has made no secret of his desire to grow in the US via further deals,” the  Journal wrote. Read 7 remaining paragraphs | Comments

Scientist invents ice cream that changes color as you lick it 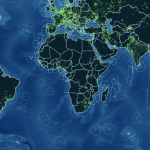 A Pirate-Friendly Map of the Pieces of Ocean That No Country...