Motherboard carries a report that with equipment valued at about $3, 000, a group of Israeli researchers have been able to extract cryptographic keys from a laptop that is not only separated by a physical wall, but protected by an air gap. This, they say, “is the first time such an approach has been used specifically against elliptic curve cryptography running on a PC.” From the article: The method is a so-called side-channel attack: an attack that doesn’t tackle an encryption implementation head on, such as through brute force or by exploiting a weakness in the underlying algorithm, but through some other means. In this case, the attack relies on the electromagnetic outputs of the laptop that are emitted during the decryption process, which can then be used to work out the target’s key. Specifically, the researchers obtained the private key from a laptop running GnuPG, a popular implementation of OpenPGP. (The developers of GnuPG have since released countermeasures to the method. Tromer said that the changes make GnuPG âoemore resistant to side-channel attack since the sequence of high-level arithmetic operations does not depend on the secret key.â) Read more of this story at Slashdot.

More here:
Stealing Keys From a Laptop In Another Room — and Offline

Scientists Sent a Rocket To Mars For Less Than It Cost... 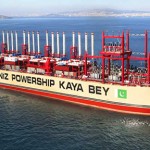 I thought this was a photoshop but it’s the weirdest ship...