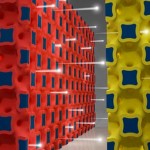 Supercapacitors are often hailed as the holy grail of power supplies, but a group of researchers at the University of Illinois have developed a lithium-ion microbattery that leaves that prized solution in the dust, recharging 1,000 times faster than competing tech. Previous work done by Professor William P. King, who led the current effort, resulted in a fast-charging cathode with a 3D microstructure, and now the team has achieved a breakthrough by pairing it with an anode devised in a similar fashion. The resulting battery is said to be the most powerful in the world, avoiding the usual trade-off between longevity and power while having a footprint of just a few millimeters. By altering its composition, scientists can even optimize the contraption for more juice or increased life. It’s expected that the technology could make devices 30 times smaller and help broadcast radio signals up to 30 times farther, but it’ll still be a while before it winds up in a super-slim phone within your pocket. For now, the researchers have their sights set on integrating the tech with other electronic components and investigating low-cost manufacturing. Filed under: Science , Alt Comments Via: Eureka Alert Source: University of Illinois News Bureau

China’s Dredging In the South China Sea Created 2,900 Acres of...