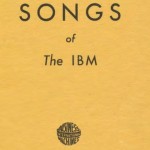 The songbook of the damned—or at least of the employed. “For thirty-seven years,” reads the opening passage in the book, “the gatherings and conventions of our IBM workers have expressed in happy songs the fine spirit of loyal cooperation and good fellowship which has promoted the signal success of our great IBM Corporation in its truly International Service for the betterment of business and benefit to mankind.” That’s a hell of a mouthful, but it’s only the opening volley in the war on self-respect and decency that is the 1937 edition of Songs of the IBM , a booklet of corporate ditties first published in 1927 on the order of IBM company founder Thomas Watson, Sr. The 1937 edition of the songbook is a 54-page monument to glassey-eyed corporate inhumanity, with every page overflowing with trite praise to The Company and Its Men. The booklet reads like a terribly parody of a hymnal—one that praises not the traditional Christian trinity but the new corporate triumvirate of IBM the father, Watson the son, and American entrepreneurship as the holy spirit: Read 11 remaining paragraphs | Comments

Why Windows Vista Ended Up Being a Mess