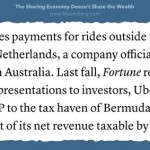 Like many other corporations, Airbnb and Uber use offshore shell companies to avoid taxes. The companies aren’t profitable yet, but they have set themselves up to avoid taxes once they become profitable. For years, pharmaceutical and tech companies including Pfizer, Merck, Google, and Apple have slashed their U.S. federal tax bills by using offshore tax havens and shifting profits abroad. Airbnb and Uber are starting to extend this strategy across vast new fields: PricewaterhouseCoopers estimates that sharing-economy businesses generated $15 billion in revenue in 2014 and will take in $335 billion in 2025, growing largely at the expense of companies that pay billions in U.S. taxes. Bloomberg: The Sharing Economy Doesn’t Share the Wealth [ via ]

View original post here:
Uber assigns "its IP to Bermuda, leaving less than 2% of its revenue taxable by the US" 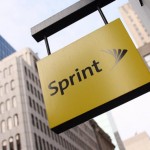 Sprint rolls out free (and slow) international data and messaging 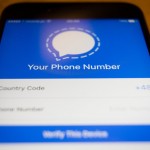 Signal tries its hand at encrypted video and voice calling