Ready for a blast from the past? Ten years ago, Walmart’s plan to undercut Netflix on DVD-by-mail rental pricing failed, and the retail giant turned that part of its business over to the movie service in exchange for a cut of the revenue, referral bonuses and Netflix promoting Walmart’s DVD sales to rental customers . A class action lawsuit against the two followed in 2009, with customers alleging they illegally restrained trade and kept prices high. Walmart settled the case for $27 million in 2011, which will turn into about $12 (paid out in gift cards or cash) for the 1.2 million people who filed claims . While the deadline to file has long passed, the payout has been held up due to appeals in the 9th Circuit Court in San Francisco against Walmart and Netflix — until now. This week judges ruled on a few items ( PDF , via Courthouse News Service ), including that the settlement was fair — that the nine named plaintiffs get $5, 000 each and a large portion went to lawyer’s fees upset a few class action members . At the time even Netflix had objections , worrying that Walmart was simply buying access to its customer list. Another factor in the ruling is that Netflix never considered Walmart a true competitor (it actually raised prices at the time , and didn’t lower them for competition, even from the much larger Blockbuster) the original ruling was correct, and subscribers could not prove they were injured by the tie-up. It’s not all good news for Netflix though, as the appeals court trimmed the $710k it was awarded for attorney fees, and turned down its request for $21, 000 to cover B&W Powerpoint documents. Of course, soon a million or so people will probably be making it rain drizzle with their $12 payouts, Netflix is now primarily a streaming company with over 57 million customers that just delivered season three of House of Cards , and Walmart, well Walmart has the Vudu Spark dongle. All’s well that ends well. [Image credit: Associated Press] Filed under: Home Entertainment , HD Comments Source: Online DVD Class , Courthouse News Service , The Hollywood Reporter 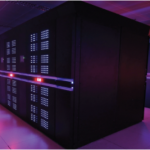 Chinese supercomputer destroys speed record and will get much faster