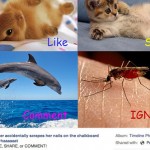 Facebook wants to clean up spam in your News Feed