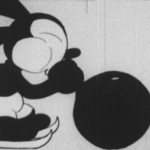 “Long-lost” 1928 Disney animation with ‘Oswald the Lucky Rabbit’ found in...