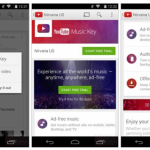 A handful of the full set of screenshots obtained by Android Police. Android Police More details have leaked about Google’s upcoming subscription service for YouTube, these in the form of screenshots posted by Android Police on Monday. The service, called YouTube Music Key, will give subscribers ad-free and offline playback of YouTube videos, as well as audio-only material. Per the screenshots, users will be able to play music on their mobile phones “with or without video, in the background, or with your screen off”—all things that the single-tasking YouTube apps could not previously do. Subscribers will also be able to play music via “YouTube Mix,” a recently-added feature that works similarly to radio stations on other streaming services. A YouTube Music Key subscription provides access to a 20-million-song catalog, roughly the same size as that of Spotify and Rdio , as well as a collection of material the app refers to as “concerts, covers, and remixes.” While YouTube is rife with content beyond artists’ official discographies, a lot of it of legally questionable provenance, it’s not clear from the screenshots how Google will decide what goes into YouTube Music Key. Subscribers to the service will also be subscribed to “Google Play Music Key” for free, which is likely a rebranded Google Play Music All Access . Read 2 remaining paragraphs | Comments

The Origin of the Candy Cane