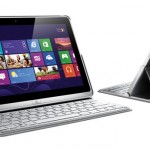 What will Acer’s outgoing CEO leave as his legacy, aside from a bit of financial wreckage? It could be a pair of brand new TravelMate Ultrabooks, the X313 and P645, which were revealed a few weeks ago and now have final pricing and availability set for this month. The 11-inch X313 is a tablet hybrid like the Surface Pro 2 or VAIO Tap 11 , except that it’s priced higher (at $950), has a lower resolution (1366 x 768) and comes with an older Ivy Bridge Core i5 processor instead of Haswell. This strange choice of silicon could potentially have an impact on battery life, which is officially rated at six hours. Then again, the X313 has a redeeming feature in its portability: at 0.39-inches thick and 1.74 pounds in weight, it’s slightly less of a burden than the two-pound Surface Pro 2. The base spec also includes a 120GB SSD, versus the Microsoft hybrid’s 64GB. Meanwhile, the P645, shown below, does possess Intel’s latest chip, but it’s a more traditional business Ultrabook in an ocean of similar products. The 14-inch Core i5 version also starts at $950 for the base configuration, with a 1366 x 768 display and integrated graphics. Spending more will add a 1080p panel with discrete AMD graphics, although doing so will bring you closer to ThinkPad territory, especially now that the new ThinkPad T440s has launched at $1, 149. As far as legacies go, therefore, we’d suggest that JT Wang puts something else on his CV: perhaps the Iconia W4 or even the new Chromebook . Filed under: Laptops , Tablets , Acer Comments

See more here:
Acer goes up against the Surface Pro 2 with its own $950 hybrid

Are processors pushing up against the limits of physics?