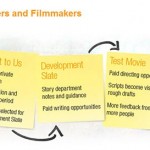 Amazon Studios is hell-bent on developing movies and TV series , and on top of script submissions , it’s now asking filmmakers to send in 2-15 minute long shorts to pitch their feature-length film ideas. Those would serve as a foundation for your project and “express an idea that’s begging to be seen on the big-screen, in full-length, full-budget form,” according to the division’s Hollywonk blog. Amazon Studios will spend 45 days evaluating each submission, and those added to the development slate will receive $10,000. After that, you’ll get put into the development pipeline, which could get you paid writing and directing opportunities, guidance and feedback from partners like Warner Bros., and up to $400,000 if your baby hits theaters. Private submissions are welcome, but if you’re feeling brave, you can also post it for the world to see — hit the source or More Coverage link for more info. Filed under: Home Entertainment , Amazon Comments Source: Amazon Studios Hollywonk blog