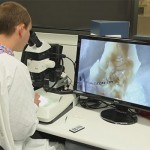 Cochlear implants already help those with auditory damage to hear better , but what if they could also grow new nerves while they’re there? Scientists at the UNSW have discovered a way to do just that, at least in hamsters. After they introduced a gene therapy solution, a modified cochlear implant used electrical pulses to deliver the treatment directly to auditory nerve cells. That successfully re-generated so-called neurotrophins in the animals, which in turn aided nerve development and significantly improved the implant’s effect. Such therapy could one day help the hearing-impaired to pick up sounds better, especially the subtle tones in music. There’s a long ways to go prior to human trials, however, since it was only effective in the hamsters for a short time. But it could one day be included as part of cochlear implant therapy and even help other nerve-related conditions, like Parkinson’s disease or depression. [Image credit: UNSW Translational Neuroscience Facility] Filed under: Science , Alt Comments Via: The Verge Source: UNSW