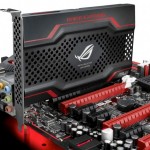 These days, it’s fairly easy to find a PCI Express-based SSD to transform one’s desktop — Angelbird , Fusion-io , Micron and ASUS will sell you one, just to name a few. That said, the last of those three has just revealed a new entrant that will certainly catch the eye of many, as the RAIDR Express claims to be the first PCI-e SSD to be compatible with both legacy and UEFI BIOS. The so-called DuoMode feature is joined by 240GB of storage space, sequential 830MB/s read and 810MB/s write speeds and a reported 620, 000 hours mean time between failure (MTBF). You’ll also find the latest LSI SandForce controller, Toshiba-built 19nm MLC flash, and 100, 000 4K read/write input/output operations per second (IOPS). The bundled RAMDisk utility allows users to dedicate up to 80 percent of a computer’s available RAM for use as a high-speed virtual drive, and if you needed any further proof that it’s fast, look no further than in the video after the break. Curiously, ASUS isn’t talking pricing just yet, but it should start shipping in the very near future. Filed under: Gaming , Storage , ASUS Comments Via: PC Perspective , Engadget Japanese Source: ASUS