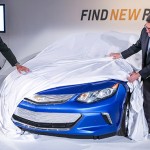 We’ll be seeing the next-generation Chevy Volt in less than two months when GM launches it at the North American International Auto Show in January. But for the sake of those who can’t wait, the company has shown off a bit more of the 2016 hybrid model at an event in Los Angeles. While the first photo that came out in August only displayed the vehicle’s logo, these series of images (there are more after the break) shows almost the whole front end with its redesigned silver grille and more angular headlights. We still don’t know if it’s going to be significantly cheaper than its predecessor, but General Motors has at least revealed that the car will boast GPS location-based charging. Apparently, the new Volt will automatically adjust its charge settings when it determines that you’re at home based on GPS data. For instance, the car can tweak its charge levels, as well as make sure it’s only consuming electricity during off-peak hours. It can also start the process at a particular time each day (or week) if you’re charging in your own house, instead of at a charging station. Plus, there’s now a status indicator light (pictured below) on top of the instrument panel that lets you know how much the battery has been charged through a series of flashes. That’s about what the company has announced for now, but if you’ve been waiting to hear about the next-gen Chevy Volt for years, you’ll be able to wait two more months for the full deets. [Image credit: General Motors] Filed under: Transportation Comments Source: GM