An anonymous reader writes with a story about the possibility of genetically engineered salmon showing up on your table. “A controversial genetically engineered salmon has moved a step closer to the consumer’s dining table after the U.S. Food and Drug Administration said Friday the fish didn’t appear likely to pose a threat to the environment or to humans who eat it. AquAdvantage salmon eggs would produce fish with the potential to grow to market size in half the time of conventional salmon. If it gets a final go-ahead, it would be the first food from a transgenic animal – one whose genome has been altered – to be approved by the FDA.” Read more of this story at Slashdot. 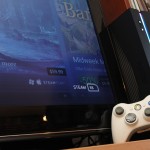 A Steam Machine without Valve: life with the iBuyPower SBX