An anonymous reader writes “A former MIT instructor and students have come up with software that can write an entire essay in less than one second; just feed it up to three keywords.The essays, though grammatically correct and structurally sound, have no coherent meaning and have proved to be graded highly by automated essay-grading software. From The Chronicle of Higher Education article: ‘Critics of automated essay scoring are a small but lively band, and Mr. Perelman is perhaps the most theatrical. He has claimed to be able to guess, from across a room, the scores awarded to SAT essays, judging solely on the basis of length. (It’s a skill he happily demonstrated to a New York Times reporter in 2005.) In presentations, he likes to show how the Gettysburg Address would have scored poorly on the SAT writing test. (That test is graded by human readers, but Mr. Perelman says the rubric is so rigid, and time so short, that they may as well be robots.).'” Read more of this story at Slashdot. 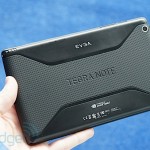 EVGA Tegra Note 7 review: a gaming tablet with much to...