An anonymous reader writes “An article at FiveThirtyEight looks at the likelihood of various occupations being replaced by automation. It mentions President Obama’s proposed increase to the federal minimum wage, saying big leaps in automation could reshape that debate. ‘[The wage increase] from $7.25 to $10.10 per hour could make it worthwhile for employers to adopt emerging technologies to do the work of their low-wage workers. But can a robot really do a janitor’s job? Can software fully replace a fast-food worker? Economists have long considered these low-skilled, non-routine jobs as less vulnerable to technological replacement, but until now, quantitative estimates of a job’s vulnerability have been missing from the debate.’ Many minimum-wage jobs are reportedly at high risk, including restaurant workers, cashiers, and telemarketers. A study rated the probability of computerization within 20 years (PDF): 92% for retail salespeople, 97% for cashiers, and 94% for waitstaff. There are other jobs with a high likelihood, but they employ fewer people and generally have a higher pay rate: tax preparers (99%), freight workers (99%), and legal secretaries (98%).” Read more of this story at Slashdot. 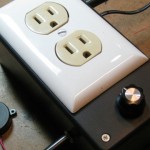 Turn Off a Lamp By Tapping Your Nightstand with this DIY...

Is Safari the New Internet Explorer?