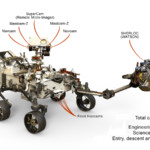 The Mars 2020 rover will be able to show us more of the red planet than any of its predecessors ever did. NASA says the extraterrestrial vehicle will be equipped with 23 cameras , six more than Curiosity’s and all a lot more capable. Seven of those “eyes” are tasked with collecting data for scientific experiments, nine are engineering cameras that will keep an eye on its surroundings for navigation and the last seven will capture the rover’s descent and landing. Its main camera, however, is Mastcam-Z — an upgraded version of Curiosity’s Mastcam with a 3:1 zoom (hence, “Z”) lens the original didn’t have. Mastcam-Z will have the capability to take more 3D images than the first Mastcam and will give NASA scientists more info on the planet’s geological features. Meanwhile, the engineering/navigation cameras will be able to capture high-resolution, 20-megapixel colored images for the first time. Previous Navcams were only able to take one-megapixel black-and-white photos, so they have to capture several and stitch them together to be able to get a clear view of the surroundings. Since these new cameras have a wider field of view as well, they don’t have to waste time and processing power stitching photos together. The rover can spend that time collecting more samples and snapping more pictures instead. All those cameras will help the Mars 2020 rover achieve its goal to search for signs of past life on the red planet. Earlier this year, the agency picked three potential sites to drill, all of which have elements that could have supported life. Source: NASA

Facebook reminds you of the good times, bad haircuts with personalized...