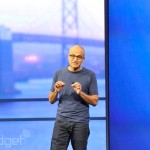 Microsoft constantly reminds us that Google scans email in order to sell ads . Now it’s adapting its policies to specifically state that it won’t engage in the same practices as its rival. Well, not all of them. In an effort to be more transparent and build trust, the company has updated its service agreement and privacy policy to make it clear that it will not access your content to sell ads. “We do not use what you say in email, chat, video calls, or voicemail to target advertising to you, ” Microsoft notes. “Nor do we use your documents, photos, or other personal files to target advertising to you.” However, the policy, which covers most of Microsoft’s online services, including Bing, Outlook and OneDrive, won’t come into effect until July 31st. To be clear, however, Microsoft isn’t ignoring your data completely, and there are still a few clauses to be aware of. While Microsoft says it won’t access your content to sell you ads, it does state that it will collect data from your account. The company says this content includes “your communications and your files, ” which ranges from words in an email or documents stored on OneDrive. It’s a muddy area, but Microsoft says it does so in order to gain an insight into how you use its services. Remember when Microsoft came under fire for rifling through someone’s Hotmail account without permission? The company vowed to go through a more stringent process in future cases and has updated its policy to reflect that change. Instead of inspecting content on its own, it will now refer suspicious activity to law enforcement. All of the changes have been made available before the July 31st deadline so you can run through the new terms with a fine-toothed comb. If you want to opt out, Microsoft will kindly show you the door — you’ll need to either stop using its services or close your account. Filed under: Internet , Microsoft Comments Via: Neowin Source: Microsoft Service Agreement , Privacy Policy

See the article here:
Microsoft expands its pledge not to sell ads against your private data

Studying the Slow Decay of a Laptop Battery For an Entire...