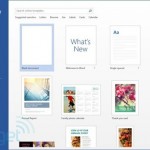 Right on time , businesses with the inside track to Microsoft’s account team and partner program can now snag the latest version of Redmond’s content production software suite, Office 2013 . What’s that? You’ve got the hook up, but you were also hoping for Exchange Server 2013, Lync Server 2013, SharePoint Server 2013, Project 2013, and Vision 2013? You’ll be happy to hear that those are also available today — the already announced “first quarter 2013” release window for Office 2013 stands, when it’ll become widely available both digitally and at direct retailers. The big update to Office this time around comes in the form of Windows 8-style visuals and cloud-based saves using Microsoft’s SkyDrive service. We’ve got a full hands-on right here if you’d like to learn more ahead of next year’s big launch. Filed under: Desktops , Internet , Software , Microsoft Comments Via: WinSupersite Source: Microsoft

Massive hack of 70 million prisoner phone calls may be biggest...