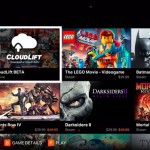 In early August 2012, OnLive employees told us that the cloud gaming company was close to falling apart . Despite creating an impressive service rooted in a futuristic idea — playing bleeding edge PC games on the highest settings, remotely, streaming from the cloud to virtually any device — a cocktail of financial issues all crested at once . The result was mass layoffs ( “at least” 50 percent ), including lead evangelist and company CEO Steve Perlman. OnLive had a new owner, venture capitalist Gary Lauder, and a renewed directive to become profitable. Then, the company went silent. “My focus has been on turning this from proof of concept into a real business.” – Gary Lauder Its services continued operating — business as usual, as it were — and as media, we didn’t hear a peep. The usual trade show appearances and interview opportunities dried up. Our last post about OnLive before this was in February 2013 . Today, that’s changing: the company is re-opening the lines of communication, announcing two new initiatives in CloudLift and OnLive Go. The first, CloudLift, takes the cloud streaming concept of OnLive and applies it to games you already own. By logging in with a Steam account (required, at least for now), games you’ve got attached will be “unlocked” in the cloud, playable using the OnLive client or Microconsole anywhere else (including save data that syncs between devices). Of course, not all games registered or bought through Steam will work with CloudLift; just 20 games are launching with the service today, with “dozens more planned.” Lauder told us OnLive’s game onboarding process has been streamlined significantly, specifically with the intent to bring more games, more rapidly to OnLive. The First 20 Games Batman: Arkham Asylum GOTY Batman: Arkham City GOTY Batman: Arkham Origins Darksiders II Dead Island GOTY Dead Island: Riptide LEGO The Lord of the Rings Metro 2033 Mortal Kombat Komplete Edition MX vs. ATV Reflex Painkiller: Hell and Damnation Red Faction: Armageddon Saints Row IV Scribblenauts Unlimited Strike Suit Zero The Book of Unwritten Tales: The Critter Chronicles The LEGO Movie Videogame The Raven: Legacy of a Master Thief Truck Racer Type: Rider Interested? OnLive’s hoping you’re interested enough to drop $15 every month for the functionality (there’s also a seven-day trial). It goes live today. The other side of today’s news is a totally new route for OnLive. A new business unit, dubbed “OnLive Go, ” takes the company’s cloud abilities and applies them to other people’s stuff . The first example is “SL Go” (or “Second Life: Go”), a mobile interface for…you guessed it, Second Life . In this particular example, OnLive’s powering cloud support for Second Life on Android. In another example, OnLive’s working with Gaijin Entertainment to help support people testing out games — rather than having to download a huge file and start a game, you can just stream a demo. OnLive’s executive staff called this a “much more efficient” method of stabilizing the company, while still supporting legacy customers. It’s not hard to see their logic: Gaikai employed the same method for growth before being purchased by Sony for a whopping $380 million . Lauder insists that the goal here isn’t to “flip the company, ” but to build value — and lasting value — whether it’s for us or for some future suitor.” So, what does that mean for those of us still using OnLive’s PlayPass system? It is no more, “but users who have purchased games will continue to have access to them, ” an OnLive rep told us. The functionality is being replaced (and enhanced) by CloudLift, thus obviating its continued existence. The PlayPack “all-you-can-eat” model — which costs $10/month and offers access to all of OnLive’s games — remains in place. Whether these moves will turn OnLive around is still up in the air, but Lauder and co. certainly sound more realistic than their predecessors. With major players embracing game streaming in PlayStation Now and Steam , the playing field is more crowded than ever. OnLive is certainly the underdog here: can it fight its way back? Filed under: Gaming , Software , HD Comments

This Slick New App Is Like Popcorn Time for Music