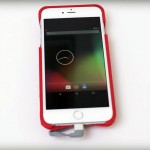 Familiar with cramming one operating system into somewhere it doesn’t belong , developers at Tendigi have just created a homemade iPhone case that lets you run Android on your iOS smartphone. (Well, kind of). Fortunately, because of the Android Open Source Project , it gave Nick Lee the freedom to clone the mobile OS and build his own local hardware. Before he went that far, Lee decided to test the concept — streaming Android across to an iPhone through a cable — with a Nexus 5. He needed tools that could communicate with iOS, as well as services that let USB cables play nice with an iPhone. Lee also crafted software that transmitted what was happening on the Android devices’ screen to the iPhone, while also send touch-input back. The next challenge: cramming it all into an iPhone “case”. See it working after the break. He then made his own tiny Android development board (all the technical specifics are here ), linking it to the soon-to-be franken-iPhone and its own power supply, prototyping and 3D-printing an enclosure to house it all and attach to the iPhone. It’s not the prettiest case, and really you’re ‘streaming’ Android to your iPhone screen, but it’s the man-hours thought that counts, right? Source: Tendigi

More:
Run Android on an iPhone – with some heavy engineering and caveats