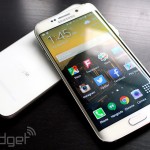 It’s no secret that Samsung’s curvy Galaxy S6 Edge costs a pretty penny, but there’s now a good explanation as to why. IHS estimates that the raw price of assembly for a 64GB Verizon model is $290. That’s more expensive to make than not just the Galaxy S5 ($256 when new), but also the 128GB iPhone 6 Plus ($263) — if true, Samsung is giving up a lot of profit to make this exotic hardware affordable. The bendy AMOLED screen is unsurprisingly the costliest element here with an estimated $85 price, although the Exynos 7 processor ($30), 3GB of DDR4 memory ($27) and flash storage ($25) certainly aren’t cheap. It’s hard to know just how accurate this manufacturing bill is. Samsung makes its own parts, after all, and it could have scored a deal to get components at a lower rate. And as always, the cost of assembly doesn’t tell you the full story. That $290 doesn’t include patent licensing, development or other expenses needed to put the S6 Edge in your pocket. Even so, it’s apparent that Samsung is still willing to sacrifice its bottom line to one-up the competition. Filed under: Cellphones , Mobile , Samsung Comments Source: Recode

Australian State Bans IBM From All Contracts After Payroll Bungle

Chinese Bitcoin Exchange Vanishes, Taking £2.5m of Coins With It