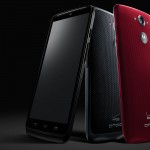 What’s black and Kevlar and screams “turbo”? Okay, yes, a modded BMW M3. But also Verizon’s latest smartphone, the Droid Turbo by Motorola. Regular Engadget readers assuredly know a lot about this phone already : it’s got a 5.2-inch Quad HD AMOLED display covered in Corning’s Gorilla Glass 3, a Kevlar back, and an incredibly long battery life. Verizon’s touting “up to” 48 hours of power and a quick charge feature that nets “up to 8 hours of use” from a 15-minute charge (using a specific charging cable included with the phone, naturally). The Droid Turbo’s not all charge and no oomph: a Snapdragon 805 processor is the heart of the Turbo (a 2.7GHz quad-core CPU) and an Adreno 420 CPU (running at 600MHz) handles graphics on that fancy Quad HD screen. 3GB of RAM handles memory, making all that processor power worth a damn. Should processor speeds not excite you, perhaps megapixel counts will? The camera out back on the Droid Turbo is a whopping 21-megapixels. And yes, relax, your selfies are safe: there’s a front-facing camera with 2MP resolution and 1080p video capability. In terms of the rest of the specs, the Droid Turbo is keeping up with the Joneses with Bluetooth 4.0, 802.11 in all the flavors (a/g/b/n/ac), NFC, and microUSB for connectivity. Verizon’s XLTE comes inside the Droid Turbo as well — surprise! Honestly, it’s just a little frustrating to see this thing debut so shortly after the Moto X first hit the scene. After all, it basically improves on just about everything we didn’t dig about Moto’s recent flagship , so if you just bought one you might want to keep the receipt handy. In fact, all of the voice and gesture ability in Motorola’s Moto X is also in the Droid Turbo. How about that ?! Okay, now the elephant in the room: what’s powering that “up to” 48 hours of battery life? A 3, 900 mAH battery is nestled behind that tough exterior, sitting next to 32GB of internal storage (64GB optionally if you wanna get crazy ). It’s available October 30th; Droid Turbo starts at $199 (with a two-year contract) and jumps to $249 when you add the extra storage. So, how does the phone feel? Is it any good? These are all good questions that we don’t have answers for just yet, but we’ll have a hands-on for you shortly. Hang tight! Filed under: Cellphones , Handhelds , Mobile , Verizon Comments

See the article here:
This is Verizon’s Droid Turbo: 5.2-inch Quad HD display, up to 48 hours of battery life

Cops Are Raiding Homes of Innocent People Based Only On IP...