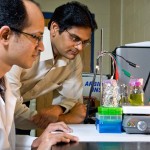 There’s a more efficient way to harvest energy from the backyard than by wiring up hapless critters . Researchers at the University of Georgia have proof: they’ve discovered a way to generate electricity from plants through hijacking the photosynthesis process. By altering the proteins inside a plant cell’s thylakoids, which store solar energy, scientists can intercept electrons through a carbon nanotube backing that draws them away before they’re used to make sugar . While the resulting power isn’t phenomenal, it’s still two orders of magnitude better than previous methods, according to the university. The protein modification method may have a rosier future, as well: the team believes that it could eventually compete with solar cells, producing green energy in a very literal sense. Filed under: Science , Alt Comments Via: Gizmag Source: RSC Publishing , University of Georgia