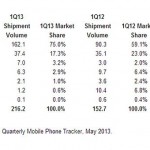 First and second place in the smartphone OS wars is a foregone conclusion with Android and iOS (respectively) strongly entrenched , but the battle for third place is now full of intrigue. BlackBerry and Microsoft have each stepped up their games with their respective BB10 and WP8 OS’s of late, but so far it’s Redmond prevailing, having jumped two spots from last quarter to take third place, with a 3.2 percent share over BlackBerry’s 2.9 percent. While those two are fighting for third place scraps, Android kicked up its smartphone OS dominance with 75 percent of the global market, which is a huge jump from last year , while iOS fell back slightly to a 17.3 percent share. Between them, those titans owned 92.3 percent of the pie, but it’s arguably Windows Phone that has raised its game the most, with a senior IDC analyst claiming that this latest ranking “validates the direction taken by Microsoft and key partner Nokia.” Filed under: Cellphones , Mobile Comments Source: IDC

This Is Why Vine Is Stupid

Check Out the Evolution of the US Dollar Bill