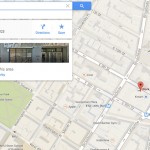 The incredibly useful “search nearby” tool was one of the casualties of the Google Maps redesign, but today Mountain View re-introduced the feature. For those who didn’t constantly use it to find new Indian restaurants a few blocks from their apartment ( ahem ), “search nearby” lets you pull up businesses and other points of interest based on an address, neighborhood or other location. It’s already re-added on the desktop; simply type in a place and the “search nearby” bar will turn up. To be fair, it’s not like you couldn’t search for tacos near the Empire State Building with the new Google Maps that began rolling out last month — you could get the same functionality by doing a follow-up search after typing in an address — but “search nearby” is much more user-friendly. Unlike the latter method, it also lets you control the zoom level to get results within a particular distance of your location. And, no, we’re pretty sure this isn’t an April Fools’ joke. Filed under: Internet , Google Comments Via: SlashGear Source: @GoogleMaps

Read this article:
Google Maps users, rejoice: ‘search nearby’ is back