vinces99 writes “Scientists have unveiled a comprehensive portrait of the genome of the world’s first immortal cell line, known as HeLa, derived in 1951 from an aggressive cervical cancer that killed Henrietta Lacks, a 31-year-old African-American woman. The cells, taken without her or her family’s knowledge, were pivotal in developing the polio vaccine, in vitro fertilization and cloning, and were the subject of a 2010 New York Times best-seller ‘The Immortal Life of Henrietta Lacks.’ The Lacks family has never been compensated and, until this new University of Washington study, has never had a say in how the information is used. The study, published Aug. 8 in Nature, pieced together the complicated insertion of the human papillomavirus genome, which contains its own set of cancer genes, into Lacks’ genome near an ‘oncogene, ‘ a naturally occurring gene that can cause cancer when altered. Scientists had never succeeded in reproducing cells in a culture until the HeLa cells, which reproduced an entire generation every 24 hours and never stopped. The cells allowed scientists to perform experiments without using a living human. The researchers discovered that the genome of the HeLa cell line, which has been replicated millions, if not billions of times, has remained relatively stable.” Read more of this story at Slashdot. 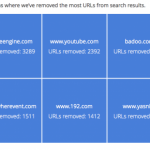 Google has removed 170,000-plus URLs under “right to be forgotten” edict