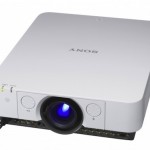 It wasn’t too long ago that Sony kind of introduced us to its inaugural Laser Light Source Projector with 3LCD technology, but now it’s time for the company to let us know a little more about the device. For starters, Sony’s officially dubbing it VPL-FHZ55, and it’s also emphasizing that it’s indeed the world’s first laser projector to be powered by 3LCD imaging tech. Just as we’d heard back in January, the lamp-less VPL-FHZ55 can deliver 4,000 lumens of color light at a maximum resolution of 1,920 x 1,200, which Sony says should be more than enough steam to “deliver bright and vivid color reproduction.” The VPL-FHZ55 is expected to be available later this August, however there’s no word on how much you’ll have to spend to add one of these to your setup. But, while we wait for those details to come to light, perhaps you’d be interested in perusing the gallery below. Gallery: Sony VPL-FHZ55 Laser Light Source Projector Filed under: Misc , Home Entertainment , HD , Sony Comments Source: Sony

More:
Sony’s Laser Light Source Projector with 3LCD to be available in August

An LED Wand Turns Your Wine Bottles Into Lamps Without Flame